Well, we had a bit of a dramatic bank holiday weekend! Our relaxing BBQ with friends turned a bit frantic when the gas canister caught fire (due to a faulty seal). It  could have turned out quite nasty, but luckily didn't thanks to my clever husband managing to put the fire out while we waited for the Fire Brigade. Actually more than lucky as we're quite rural so it's a ways for them to come..... We had 3 fire engines and a fire car turn up and quite a bit of attention from the street (blush), what a lot of excitement for what was going to be a chilled bank holiday Monday.....!

I was so impressed with the fire brigade though, awesome bunch of people, and to look on the bright side, the girls gained a new role model thanks to a rather pretty blond firefighter, they were totally in awe of her. Great to see them inspired by someone other than a Disney Princess (not that there is anything wrong with Disney Princesses, but it makes a nice change!)

Before our day took such a dramatic turn we had enjoyed great company and some yummy food and I got to try my green smoothie popsicle recipe out on some other children which is always good! They went down a storm. I love green smoothies, and they're very popular with kids too as they are a nice bright colour and  fun to drink. If, however you have trouble tempting little ones into a smoothie, turning them into popsicles has got to be a winner! They are juicy and refreshing and perfect for a sunny afternoon, and you're getting a bunch of raw greens into your kids too, marvellous I say!
Long may the sunshine remain and there be many more green smoothie popsicle days (and recipes) to come!

Method:
Put the ingredients into a blender in the order above and blitz until really really smooth! 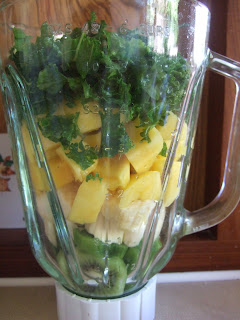 Pour into ice lolly (popsicle) moulds and freeze until set. 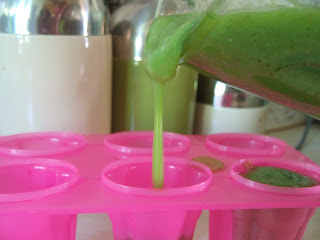 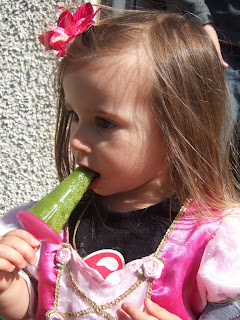 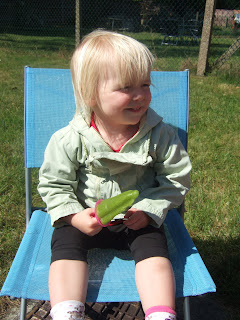