The girls and I have spent most of the day outside colouring and playing ball barefoot which has been a delightful change from all the recent rain! The rays of the sun, the fresh air and the connection to the earth are also a marvelous combination to give yourself a physical and mental boost  ('I'm actually going outside to get my vitamin D and earth myself' says Fia; that girl is going places!)

On days like this it is super easy to eat mainly raw foods, the fresh, bright and vibrant food suits the weather perfectly. So we did a pretty simple, minimum cook lunch that was also very tasty! If you're planning this in advance, be sure to soak your quinoa overnight to help it digest more easily, but if you're in a  rush, soak it for as long as you can spare, at the least a very thorough rinse will suffice!

Interestingly both my girls prefer their peppers raw to cooked which is great as it is quicker to prepare and richer in nutrients! If you prefer your peppers roasted, by all means roast them first before filling with the quinoa mixture, they will still be delicious.

Method:
Put the quinoa in a saucepan and cover with water until it comes about half a centimetre above the quinoa. Add the bouillon and give it a good stir. Bring this to the boil, and as soon as it is boiling, put a lid on the pan and reduce to lowest heat setting. Leave it to very gently for about 15 mins, there is no need to stir and avoid checking it too often, as you want to keep the steam in to help it cook. When ready all the liquid should be absorbed and the seeds separated. Fluff the quinoa with a fork and tip it into a bowl to cool.
Whisk together the oil, lemon, garlic, salt and pepper to make a dressing. Place the runner beans in a bowl and pour half the dressing over the beans, coat well and set them aside.
Divide the bell pepper halves between two plates, ready to fill with the quinoa mixture.
When the quinoa has cooled down a little, pour over the other half of the dressing and combine. Mix through the spring onions, raisins, tomatoes, olives, parsley (or coriander) and chili. Spoon the mixture evenly between the bell pepper halves and add the beans on the side, drizzle over some extra virgin olive oil or hemp seed oil on everything and you have a colourful, pretty and healthy dish!

PS we would like to thank Clare and Kieron for the delicious beans which were fresh from their garden :) 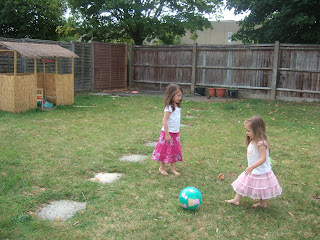 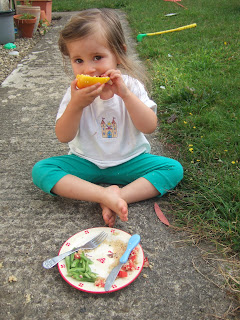 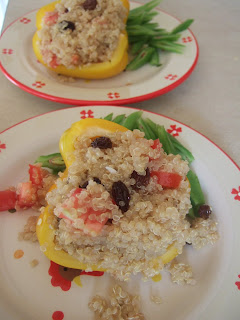