Well it's been quite a manic few of weeks for us! First of all our poor cat Jaguarundi got hit by a car.... Luckily he is OK, he spent 8 days at the vet hospital and has wire in his jaw but he's home and doing well. It was a bit of a trauma for everyone poor boy.
On top of that, we had two very special birthday girls! Dorrie's birthday was the end of august and Fia's is the start of September, so the weekend in between I wanted to do something for them to celebrate!
We thought about throwing them a party, we have never done that before preferring to spend a special day together as a family, however I was beginning to feel the pressure a bit that they should be having some form of a gathering involving their friends. Problem is, to me, they still feel too young for proper parties. I have memories from when I was even older than they, where the whole occasion of a birthday and celebration totally overwhelmed me! It was all a bit much; and anyway, there are plenty of years for parties, especially now Fia has started school (eeeeek).
But of course we really wanted to do something for them, so I asked Fia and Dorrie what they wanted to do for their birthdays. It was (predictably being my daughters) mainly about the food, Fia wanting a raw food 'feast' with all sorts of delights mentioned, and Dorrie wanting a raw chocolate tart!
This was music to my ears, how could I say no? My Mum (Nanny) was here for the weekend too so the girls were super excited, and we had our very good friends come round with their daughters and also another awesome friend with her son, come to enjoy the food with us! Not a party, but an afternoon with friends who they see regularly (so it was special without being overwhelming). Kind of like a sophisticated play date really, with wine for the grown ups!
Here are some photos of the feast, many of the ideas were Fia's! It was only possible with help from our friends and my Mum so thanks guys for helping in the Kitchen in both preparing the food and clearing up, you all are awesome! :) 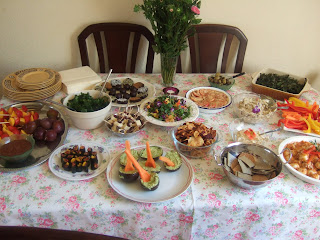 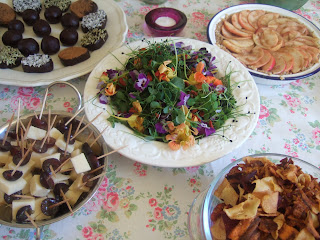 Close up of the pretty fairy shoot salad and my raw apple pie which I'm totally proud of! :) 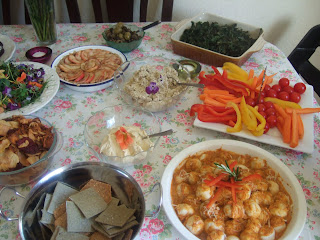 Close up of the delicious semi-raw gnocchi! 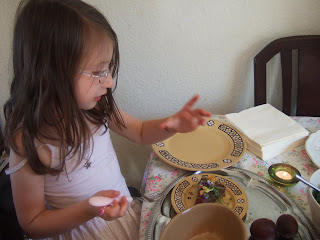 Fia eating the raw chocolate tart (with edible flowers on the top) which I forgot to photograph in its entirety!! Silly me!!

I will be posting the gnocchi recipe soon so please watch this space!