Hello from a drizzly and rather cloudy Oxfordshire!

When I wake up to mornings like this there is simply only one solution to start the day. And that is to make hot chocolate! This isn't just any hot chocolate though I assure you, this is the most warming, spicy and comforting hot chocolate you can imagine and it tastes out of this world. Even better than that, it is all of the above and amazingly healthy for you too. This delicious drink is a long standing family favourite and is both refined sugar and dairy free, you can't get much better than that right?

It was inspired from a love of Mayan history, especially their food history. It is a HUGE interest of mine and I have realised how much we can learn from them in this area, perhaps I'll blog about it one day.....
Traditionally, (before the conquistadors) this drink would have been made with water. The milk and sugar that we now associate with hot chocolate were later European influences, which I think spoil the delicious rich taste of this drink as well as having a negative effect on the powerful nutritional qualities of cacao. I use nut and seed milks in my recipe (which add to the nutrition of the drink) to adapt it to a modern palate and also so the girls enjoy it even more, but if it is just me drinking it then I often use water, so feel free to experiment! 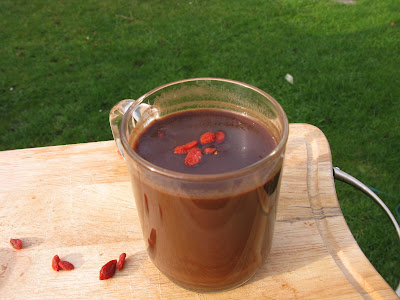 
Method
Pour your nut/seed milk into a small pan.
Cut the vanilla pod in half and scrape out the seeds into the milk. You can throw in the pod too to infuse extra vanilla flavour then bring it to a gentle simmer.
Meanwhile, in a small bowl, mix the cacao, (if using) flour and spices with just enough water to make a paste. Whisk this paste into the milk with the coconut palm sugar, salt and cacao butter if using, and bring to a rapid simmer.
Cook for about 5 mins, until the hot chocolate has thickened up slightly to make a creamy hot chocolate, about the consistency of double cream.


**Please note that if you live in the EU this food has been classed as a 'novel food' due to the Novel Foods Law. That means although we can buy it here, we are not supposed to eat it. So while US readers can go crazy with the mesquite, I am putting the cinnamon/allspice combo as an alternative for us on the other side of the pond.... ;)
Somebody do us a favour and ban McDonalds nuggets and cheese strings as 'novel foods' instead of a nutritious legume that has thousands of years of culinary use in the Americas.... Rant.
;)