We're on a chili kick right now, I love chili and now the weather has turned cold it's just what I fancy (though I have a recipe for a raw version that'll still give you that warm feeling too!). Usually when I make a veggie chili I use lentils to bulk it out (Tex-Mex style chili was easily one of my favourite things to eat), but last week I came up with a whole new idea....

When we're cooking vegetarian, we don't like to use quorn or soya mince as these are quite processed products - I've not got anything against them, it is just our preference. I was going to cook up a classic chunky veggie chili, the kind where you bite into large chunks of delicious vegetables but we had some organic chestnut mushrooms in the fridge that needed using up.

Now that's not a problem I hear you say - just bung them in too! So I'll explain.... The problem is, my girls tell me they don't like mushrooms at all, 'no way are we eating them' they say, 'they are disgusting'. Funny thing is, they LOVE mushroom burgers. They really do. They also love mushroom pate. So I reckon it is more of a texture thing with them than a taste. I thought rather than chop them up and have the girls complain, I'd blitz them up fine in the food processor to kind of thicken the sauce while also being less 'mushroomy' in texture. What I discovered was, it came out just the texture and look of veggie soya mince. Brilliant. The finished texture of the chili was really 'meaty' and the flavour rich from the mushrooms, they declared it the best chili ever. I have to agree with them and it was cheaper and healthier than any meat or meat substitute. Win win all round!

So here is my first ever recipe with 'mushroom mince'. You saw it here first people! Well... maybe! I am definitely going to use my mushroom mince in pasties and shepherds pies from now on, I look forward to sharing those with you soon :) I think you could use pretty much any mushrooms for this. I went with chestnut for the brown colour and slightly richer texture and the fact that they're so easily available. I think it would be super delicious with some shiitake thrown in there too, or portabello would make a really rich tasting dish.

Method:
First make your mince. Add the mushrooms to a food processor and blitz (highly scientific!). When you blitz them, be careful not to over process them or they'll turn into a pate, you want a 'mince' like consistency, it needs some 'bite'.
In a large pan, heat the oil  in a large saucepan and saute the onion and garlic (and chili if using) until just beginning to turn brown. Add the tomatoes and cook another 2mins. Next add the spices, beans and water and bring to a boil. Pop a lid on, reduce the heat to a simmer and cook for around 30mins.
Add the passata, oregano, mushrooms, corn, salt and pepper, cocoa powder and amino's if using, stir well to mix and continue to cook with the lid on for another 40-50mins until the beans are soft and the chili is thickened. You can remove the lid to thicken the sauce even more depending on how thick you like the sauce to be.
Garnish with fresh coriander, avocado slices and manchego and feta cheese if you like :) 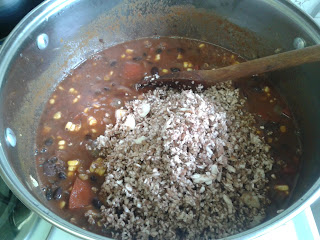 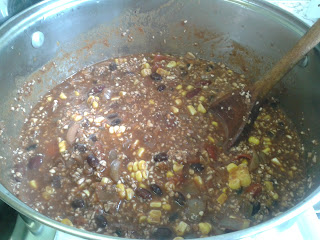