So.... It's suddenly feeling really very Autumnal here right now- yesterday we went kitted out with hats and gloves for the first time since the Summer ended. So you know what that means? Halloween and Bonfire Night are just around the corner!

Halloween is such fun for us, we always make a trip to the fabulous Blenheim Palace to go on a Halloween treasure hunt and along to Riverford's Pumpkin day to watch cooking demos, puppet shows, do fun crafts, and, most important of all, choose our pumpkins for carving. They have the most amazing selection of pumpkins I've seen here, the closest thing to the American 'Pumpkin Patch' you can get. There is really something about choosing your pumpkin right from a farm in the open air, it is so much more magical than buying them from the supermarket. Check them out if you're in the UK, there may be a Riverford farm near you!

Feeling very festive last week, I decided to make a popular Autumn treat at our house- Pumpkin pie. Only this time I went for a raw version. It was a total experiment and although I guesstimated the amounts and just kept my fingers crossed, it turned out perfect first time! I do have a slight confession mind.... It isn't actually pumpkin. You see, raw pumpkin just didn't taste as good. Something about the roasting process brings out its natural sweetness and makes it taste delicious, but raw it just tasted bland. You can make it taste sweeter of course, by adding more maple to your recipe, but I really do try to keep added sugars to a minimum. For this reason I went for squash (butternut in this case) and I'm saving the pumpkin for my baked pie recipe! ;)

I did make use of some tasty pumpkin seeds in the crust however, so it isn't completely pumpkin-less!

For the sweetener I used maple. This is not raw, but it is a natural sweetener often used in raw recipes for its delicious almost smoky flavour and rich mineral content. If you can find yacon syrup or coconut nectar these would both be an amazing alternative! . Agave syrup is also frequently used in raw foods. The more I look into agave though, the more uncomfortable I am about using it and so I try to avoid it (though I'll eat it on occasion). Do some research and decide for yourself which sweetener works best for you- remember ALL sweetener should be used in moderation, even the 'healthy' ones! 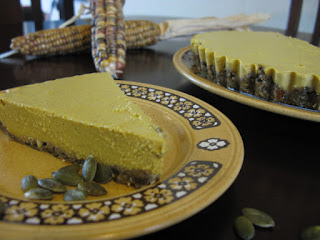 For the base:
1 cup of walnuts
1/4 cup of pumpkin seeds
7 meejool dates, pitted
Pinch of himalayan or fine sea salt

For the filling: Set 2:
1 cup of cashew nuts soaked overnight and drained
Zest of 1 lime
Juice of two big limes (3 smaller)
1 cup of nut milk- I used a mix of homemade cashew and hemp milk
The seeds of 1 vanilla pod or 1/4 tsp alcohol and sugar free vanilla extract
Just over 1/4 cup of melted coconut oil- around 85ml

First of all make your base. Blitz the nuts and seeds first until they re fine crumbs, then add the dates. Pulse the mixture until it forms a 'dough'. Press this out into a 22cm loose bottom flan/pie dish to form the crust and set aside while you make the filling.

The filling for this recipe is assembled in two parts to achieve maximum creamyness!
Tip set 1 ingredients into a food processor and blitz until as smooth a texture as you can achieve. It will still look quite 'rustic' at this stage, but don't worry-They'll get blended up later on to make it completely smooth. The smoother texture you can achieve now, the easier that will be!

Tip set 2 ingredients into a blender and blend until creamy smooth. Although this is quicker in a high speed blender, any blender will do, it will just take a little longer. Take the processed set 1 ingredients and add these also to the blender. Continue blending until well mixed and creamy- you don't want any lumps at this stage as this is the final stage of the filling.

Pour the mixture into the pie dish  and pop in the fridge for around 6 hours (or overnight) until it has set. That's it! Serve with some raw vanilla ice cream for a perfect Halloween treat.

Hope you enjoy it!