We do make alot of porridge and smoothies for breakfast at ours, they are so easy and tasty they are a no brainer stand by in the mornings. However the girls (and I) do get bored easily with the same old thing so we like to change it up a bit when we can. Smoothies are fab for the reason that there are a gazillion types of flavour combinations out there to play with. Porridge can be a little trickier to keep interesting though and that's when switching grains can be a saving grace.... Fia's favourite type of porridge is made with millet and I have to say it is my preferred grain for brekkie too!

It is quick to make and can be jazzed up with fruits and nuts for quite an exotic feel. The texture keeps some 'bite' to it too which I really like, it kind of reminds me of rice pudding as a child. It's a pretty amazing thing when you feel like you're starting the day with a pudding right?

This is the recipe I use the most at home, but you can dress up millet porridge pretty much any way you would with regular oatmeal, so give it a try next time you're stuck with the oatmeal blues...! 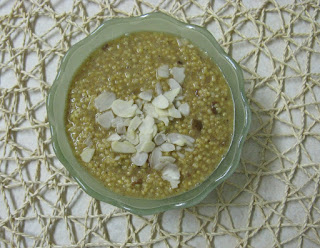 Method
Add the millet, water, salt, spices and dried fruit to the pan. Bring it up to a boil and then reduce to simmer for around 5-10mins until the liquid is nearly all absorbed. Keep and eye on it and stir from time to time to stop it sticking. Add the milk and keep cooking until you have a thick and creamy porridge. The grains won't go completely to mush, this is a good thing, it's what gives it the nice texture!
Top with the extra nuts and a drizzle of honey or maple syrup and you're done!