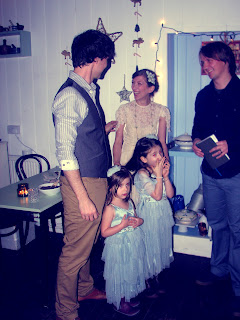 Happy new year everybody!! Is it just me or does 2013 sound incredibly futuristic?! It still doesn't feel quite real yet. 2012 has been an amazing year for us. It had not been without it's challenges but I feel we have learnt so much and have changed for the better for it. Will and I celebrated our 10 year anniversary with a vow renewal and a party on the 21st of December...and...the world didn't end! We have alot to be grateful for! ;) I'm pretty darn excited to see what happens next, we have so many exciting plans and really have no clue where we'll be even in 6 months from now which is quite scary/exciting at the same time.

So on to new years foods and the first recipe for 2013. Black beans are often eaten for good luck in the new year in many different cultures from Cuba to Japan. We've had them three times already this year, just to be sure! Now I know we've missed New Year's day now, but in Japan the new year's traditional foods are eaten over three days, so I reckon its worth cooking up some black beans today and I have the perfect recipe for you....

There are literally tons of recipes for black bean brownies out there and I've tried and tested a few. None were quite perfect however, so I've played around with some ingredients and have come up with what I think is the tastiest version out there (if I do say so myself!). This recipe uses coconut palm sugar which has a toffee like taste that works very well with chocolate. It is also high in minerals with a lower GI than sugar. Adding the chicory gives a delicate coffee like flavour without it being overpowering though you could easily use instant coffee granules in its place. The bicarbonate of soda lifts it just enough without making it too cakey like baking powder can and the chocolate chips give it a really decadent finish!

I would usually add chopped walnuts to the mix which I love, but in this last batch I made they are sans walnuts at the girls request. Personally I think they are better with, so I've added them to the list of ingredients even though they are indeed missing in these photographs.

Wishing you tons of luck for the year ahead! 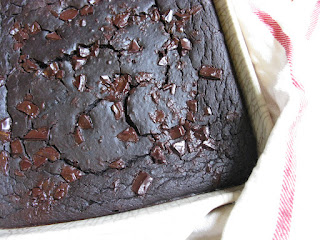 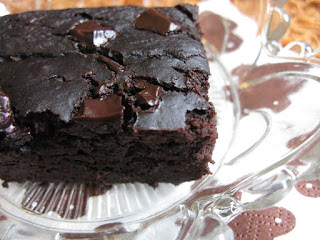 Pop all ingredients apart from the nuts and choc pieces into a food processor and process until smooth and creamy. The mixture will seem runnier than a standard brownie mix but that's ok it's meant to be! Mix in the chopped walnuts. Pour the mix into the dish and sprinkle with the chocolate chunks/pieces.

Pop into the oven for 35-40 mins until the middle is only just set. I check it frequently in the last 5 mins as they can go from perfect to dry pretty quickly!

Leave to cool on a rack before cutting into squares, if you cut too soon they'll crumble. That's the only hard part about this recipe- leaving them to cool when the delcious chocolate aroma wafts around your kitchen and you just want to dive right in!