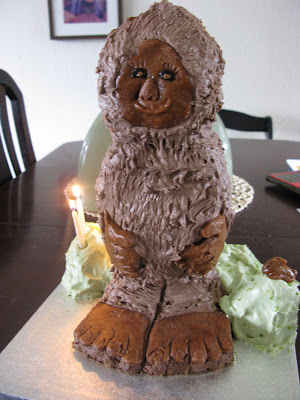 Well it's that time of year again that I am in the kitchen freaking out about Birthday cakes! Last year both my daughters had raw cheesecakes which I decorated with raw chocolate and nut icing, one with a hello kitty theme and one a fairy garden. It was all very in my comfort zone and although it took some planning it was pretty simple stuff, but this year? No such luck!

Dorrie wanted a Bigfoot cake. She has been totally obsessed with Bigfoot for a year now, so watch out Canada, when Dorrie turns 17, she informs me she's heading your way to find him ;)

So I sat and drew out some ideas and decided on a rectangle 'cheesecake' which I would pipe in chocolate nut icing, the image of a pretty Mrs Bigfoot.
Then I made a schoolgirl error and told Dorrie my plan. Oopsy.  'Oh no' she said. 'It needs to be a real, actual cake, a chicory one and Bigfoot needs to be standing up!' 'Can I make a little clay Bigfoot as a topper then?' I asked. 'That way you can keep it forever?' 'No' she said, 'I need to be able to eat the whole cake, all of it'. Hmmm. At this point I went into panic mode, I can make a sugar free cake simple enough, but I was completely phased at the idea of constructing it, and how would I make a face without sugary royal icing and marzipan? After a panic call for advice on my Facebook page, I was rescued.

A friend of mine who is the actual baking queen (watch out Mary Berry) came over and constructed him for me. I have never been so grateful. I had an idea to make a twist on edible play-dough to make it sugar free and it worked brilliantly. We then used that for her face, hands, feet and to make a flower for her hair (oh and can you spot the tiny bunny on the hillside?!) I didn't have any nuts to make a nut icing so I just sweetened some organic mascarpone cheese* with vanilla stevia and rice syrup and coloured it brown with cocoa powder for her fur. I made the green grass icing for the hills with avocado, lime, wheat grass and coconut oil which worked amazingly. So between us, this is the little Bigfoot we created- Dorrie was thrilled!

And we only had one minor slip up through it all. Will and I had got up super early on Dorrie's birthday to ice Mrs Bigfoot as marscapone icing often discolours when made in advance. We finished it, admired our handy work (Will was particularly happy with his fur effect) and I went to lift her up to move her to the fridge. I had just moved her the teeeeeniest bit, when she toppled forward right into my chest. Standing there helpless, I screamed 'Wiiiiiil' (he'd left the room). He took forever to rescue me as he was busy distracting the girls who'd just woke up. Eventually though he did come and we carried out a rescue mission on Mrs Bigfoot. We luckily managed to save her, all but a tiny dent in her face which wasn't very noticeable. Phew.

The sugar free edible play dough was such a triumph I am sharing the recipe here for you. As far as I am aware, this is the first and original sugar free edible play-dough recipe of this kind (ta-da), one that uses no flour that is. It is also suitable for gluten free and vegan diets and can be raw if you use a raw nut butter and raw honey. This opens up a whole world of opportunity for making children's healthy birthday cakes- yipeeeeeeee! 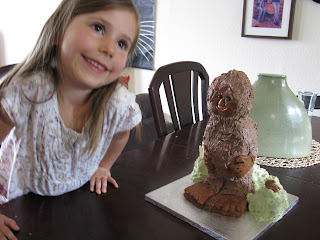 Ingredients:
1 cup Smooth peanut butter
1-2 tbsps brown rice syrup
Lucuma powder, enough to mix to a dough (varies depending on how oily your nut butter is)

Method:
Mix everything together until it becomes a mould-able dough. That's it! Sooooo easy. This makes quite a batch but it can be kept in the fridge for a few days. Try it as a filling for raw chocolates for a healthy version of Reeses peanut butter cups- nom nom.

*These days I would use CoYo coconut yoghurt to make it vegan, it makes wonderful icing! Veganized and updated Jan 2015.