I am SO excited to share this recipe with you. I absolutely used to adore Cadbury's cream eggs growing up. I was always so excited to see them on the shelves at Easter- it's hard to believe that I haven't eaten one in 5 years! Over the past couple of Easters I've made a few attempts at recreating them to be refined sugar free and I've come pretty close, but never good enough to share. But that is about to change!

When I made my first attempt at these I used agave. I wanted a sweetener without a strong taste and with a neutral colour to replicate that cream egg filling. We hardly ever use agave, but as it was a one off indulgent recipe I decided to just go for it. I have since made them with pale coconut nectar which is a preferred sweetener of mine, but it is hard to find in stores. Brown rice syrup also works for a very subtle sweet flavour and is much gentler on your system than agave. You can use whichever you feel comfortable with, they all work well.

The nuts have also been a huge part of the experiment. Macadamia nuts give a really creamy, pale finish and a neutral taste which works well. Texture wise, soaked cashew nuts worked better, much smoother and similar to fondant, but I could still taste that cashew flavour so I went with macadamia. I conclude that both nuts are acceptable choices! Which ever you use, I'm sure you won't be disappointed.

So after all the fun and experimenting, this week I finally cracked it- and this version is absolutely perfect. They're creamy, sweet and very gooey. In fact the texture is so much like the original I could almost believe I'm eating a Cadbury's egg! Even though these are super sweet, they're not as sickly as the originals, which is a great thing! Having eaten free from refined sugars for so long I am quite sure I couldn't eat the original now anyway. I hope you love these. Happy Easter! 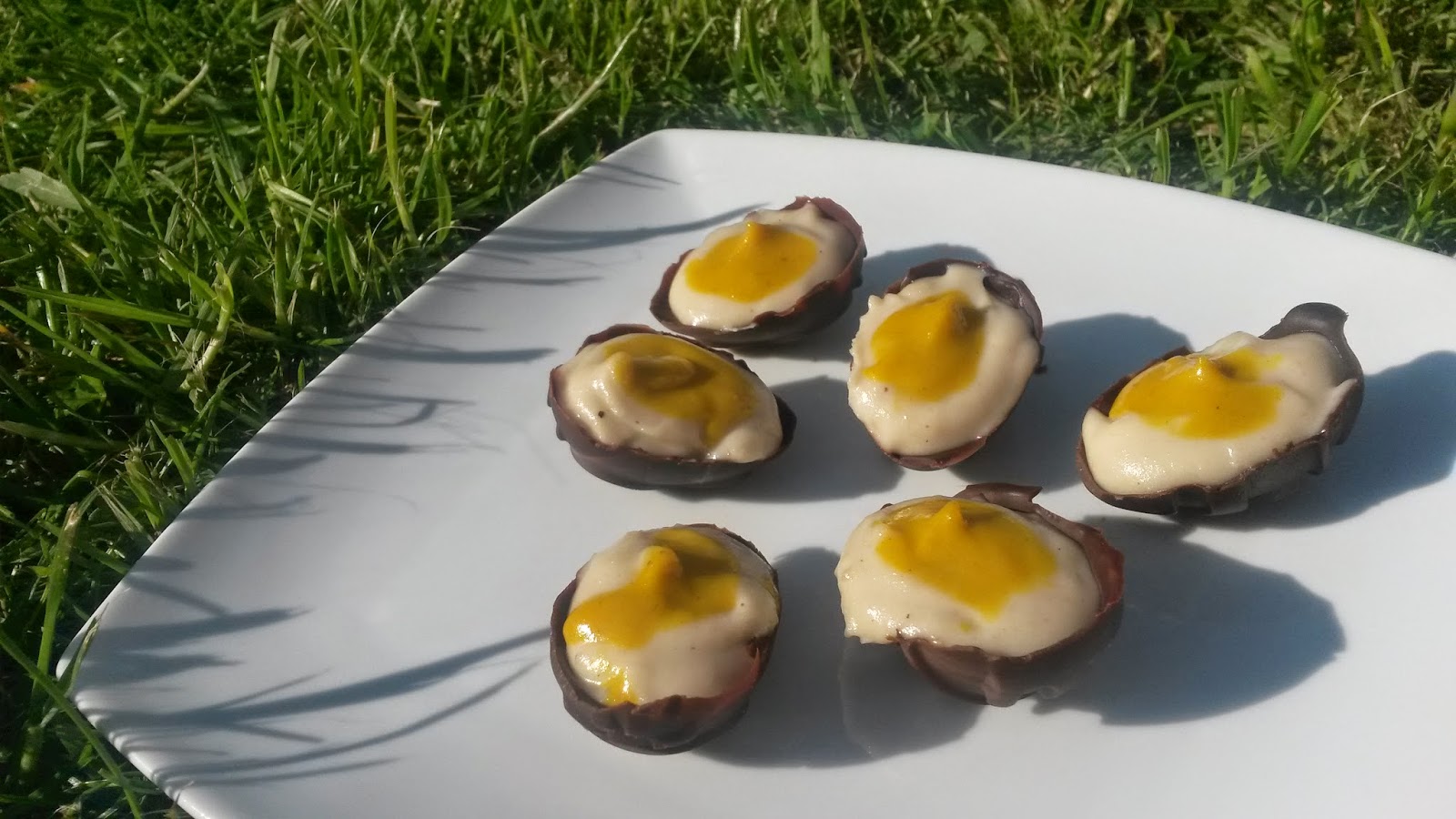 Ingredients
100g of your favourite raw or dark chocolate

Method
Add the egg white ingredients to a high speed blender and blend until smooth and creamy. Pour into a bowl. Remove 2 tablespoons of this mixture and mix with the turmeric and extra sweetner to make the yolk.

Break up the raw chocolate and add to a bowl. Stand the bowl in a larger bowl of hot water and stir until melted.

Take a mini Easter egg mould and with a teaspoon, spoon a little of the melted chocolate into each mould. Use the back of the teaspoon to coat a nice layer all around the mould. Pop into the freezer for 5 mins to firm up. Repeat, 'painting' another layer of chocolate to make a thicker shell for your filling. Freeze again for 5 minutes.

Carefully turn out the moulds onto a plate and fill almost to the top with the egg white mixture.

Next dollop a small amount of the yolk mixture into the centre of each egg and gently push it into the cream to create the yolk.

That's it! They're ready. You could also put the two halves together to create whole eggs but the filling is very gooey and a bit messy so I left them as half eggs.

*I have since discovered that using a mixture of half cashew and half macadamia is the absolute perfect combo!