I love pizza, who doesn't? With home made vegan cheese, or even without the cheese, its always yummy, but I always put tomato sauce on it. I'd heard about white pizza before, but pizza without the red sauce just sounded incredibly wrong somehow, and I just wasn't ready to go down that route!

So when I really fancied pizza for dinner the other night, I stared at the (almost) empty cupboards and faced a dilemma. There was definitely no passata in there, and no passata meant no pizza sauce. We live in the countyside, and so it's not as simple as 'popping to the shops' when I need something. It sometimes drives me crazy that we have to drive miles to get to anywhere- it is one of the downsides of living in the middle of nowhere- but it is beautiful so I shouldn't complain too much!

Anyway, if we were going to have pizza for dinner (and I was pretty determined we would, because the girls would get mad at me if we didn't), it was going to have to be pizza without red sauce. I went to get one of my recipe books, that I'd once seen a recipe for the fabled white pizza in. The book in question was 'Vegetarian Planet' by Diddi Emmons, which was given to me by a lovely friend of mine. It's a wonderful book and It's been a useful addition to our home.

I turned to her recipe for 'Fennel pizza with white-bean puree' and, pleased that I had all the ingredients I needed to make it at home, I decided now was the time to face my fear of the white pizza. And you know what? It was SO good! I don't know why I didn't try it sooner.

I did make some minor changes to the recipe (I can't help but play with recipes). The original recipe calls for a regular pizza dough, and I prefer using gluten free grains when possible, so I whipped up a batch of gluten free dough. It's a rather rustic dough as you can see from the picture, and it's hard to get it looking perfect and round. But, it is light and delicious, and pretty easy to make too. Of course you can use any pizza or bread dough you like!

The topping was also altered just a little. I added a little more of a flavour boost by finishing it with a jar of marinated artichokes, and some of the herbed oil from them made a good addition to the bean puree, along with some roatsed garlic.Artichokes are amazing on pizza, they really are made to go on it.

So here it is, I hope you enjoy! 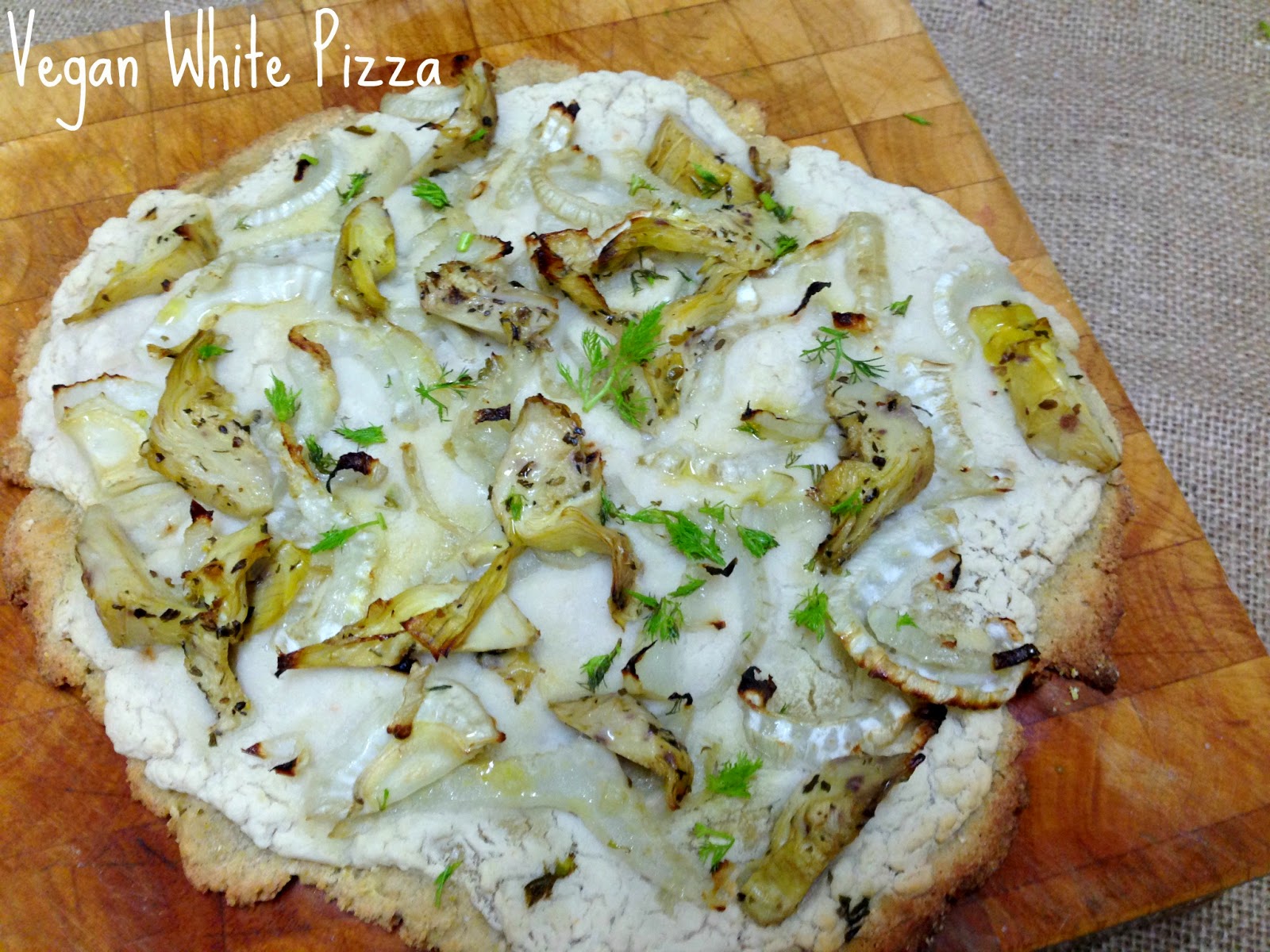 Make the dough
Add all the ingredients together in a mixing bowl and mix well to form a very sticky dough. Cover the bowl with a tea towel and leave in a warm place to rise for an hour.

When the dough is half way through rising, prepare the fennel.

Prep the fennel
Finely slice the fennel and put into a tray with a drizzle of olive oil. Add the unpeeled garlic cloves, and roast for around 20 minutes in a hot oven (180-200), until the fennel is soft and colouring at the edges.

Make the pizza
Take your risen dough and split it into two. With lightly oiled or wet hands, spread the dough out onto two lightly oiled baking sheets, that have been sprinkled with a little polenta or cornmeal, to prevent sticking.

Put into the hot oven for 5-8 mins until just starting to cook through, remove and set aside for topping.

Puree the beans with the water, the roasted garlic cloves (remove skin first), salt, pepper and 2 tbsp of reserved herbed oil from the artichoke.

Divide the bean mixture evenly between the two pizzas and spread so it covers the pizza evenly.
Top with the fennel and artichokes.

Cook for 10 mins until pizza is golden around the edges and dough cooked through.

Top them with the fennel herb (fresh oregano or basil would also be lovely)  and a drizzle of extra virgin olive oil and a sprinkle of sea salt.