I cannot believe what an exciting month this has been for me! To be in the final of PETA UK's 'Great Vegan Bake Off' and a nominee for Vegfest UK's 'Best Vegan Cook Book' is just mind blowing. I am so excited and so nervous that I've not had much time to be creative in the kitchen. That is until the girls insisted we have a Mexican night!

We used to have Mexcian nights for dinner every Sunday, but over the Summer this slipped from our routine as we've been so busy, and hardly at home. But I was so glad they brought it up, and it gave me a chance to use up the delicious tomatillos that I got in our veg box last week.

You don't come across tomatillos very much in the UK, but the good news is that this salsa works just as well with tomatoes. If using regular tomatoes, I like to add a squeeze of fresh lime at the end, it gives it that zing that you'd get with tomatillos.

We'll be serving this up tonight alongside some slow cooked beans, rice, organic corn tortilla chips and fresh guacamole- I can't wait!

If you guys have had a chance to vote for me in the bake off, thank you so much! Votes close this Friday, so if you haven't I'd really appreciate you popping on over to The Great Vegan Bake Off to vote, lets get my sugar free Schichttorte on the map and show you can have your cake and eat it! 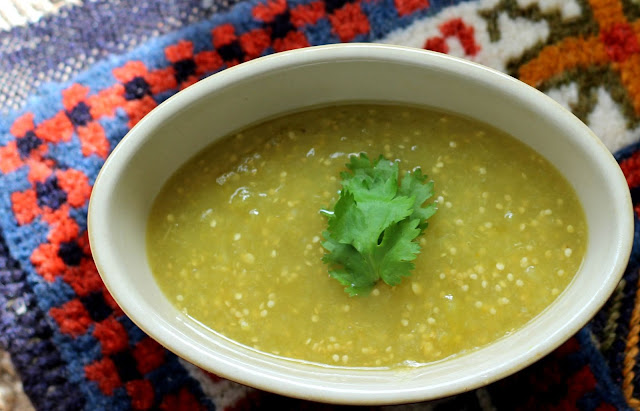 Method:
Peel the husks off the tomatillos, and peel and quarter the onion. Add everything together in a saucepan, and simmer for around 25 mnutes, until most of the liquid has evaporated.
Pour into a food processor and process to a smooth salsa.
If using regular tomatoes, add a squeeze of lime at the end.

That's it! It's the most simple salsa ever, but tastes amazing.

So you know I love a challenge right, and as I've been away for so long, I figured I'd better come up with a real cracker of a recipe for you guys to make up for it!

I've been watching the Great British Bake off, (as I do every year, in the hope somebody makes vegan bakes!) and loved that they had a dairy free, sugar free and gluten free week. This just shows how far things have come in the world of baking and it's very exciting- I hope next year they'll do a Vegan week, imagine how awesome that would be!

A few years ago now, about six in fact, my family quit refined sugar. And everybody thought we were crazy. Forward to 2015 and Jamie Oliver is presenting a programme called 'Sugar Rush' and even my dear Dad is trying to cut down the sugars he has in his tea! Times they are changing and I couldn't be happier.

While I am passionate about all vegan food, and am partial to the odd Taifun tofu hot dog, I maintain the belief that most of our diet should come from wholefoods rather than processed, and truly believe in ditching the refined sugar. My mission is to show that this doesn't mean you have to sacrifice taste and enjoyment of food as nothing is off limits, even cake! I make lots of gluten free recipes these days too, as I get many requests for them, and modern wheat just isn't what it used to be, it is, well, rubbish! I don't follow a gluten free diet myself as I include spelt, kamut, barley and rye into my diet, but I really like being able to offer alternatives to those who want them.

So, when they declared to Ugne on 'The Great British Bake off' that making both gluten free and sugar free in the one recipe was perhaps a step too far, the little rebel in me thought, 'Hmmmm, I'm going to do that and more!'

It was quite by chance that on the same day, I noticed PETA UK was accepting entries to their 'Great Vegan Bake Off', which I took as a sign for me to enter. It is a little daunting to put a creation up to be judged though and I haven't taken this decision lightly, I am a little nervous! So like a crazy lady on a mission, I decided to go all out and give it my best shot, and that just has to be a vegan, refined sugar free, gluten free, multi layered, chocolate covered masterpiece of a cake, better known as a German schichttorte!

I know this cake at first glance seems intimidating. Each layer is grilled individually to a nice golden brown creating something that looks like a cross between a stack of pancakes ad a cake, but it is not as hard as it looks I promise. Each layer needs just a couple of minutes under the grill, making it quicker than baking a standard cake (if you go for less than the traditional twenty layers that is), plus you never have the worry of it no being cooked through to the middle! I baked mine with six layers, because two were a little fat and I ran out of mix to make the eight I originally wanted. This batter mix makes the perfect amount for eight more even layers though, so if you are less heavy handed than me, this should be a breeze. The perfectionist in me wanted to make this cake again with perfectly even layers, but as I noticed this contest so late, I just didn't have the time. Plus it still tastes divine and I know you will all love it!

The first version I tried I made with coconut palm sugar, and while it tasted out of this world, and was described as 'the best cake i've ever eaten' by one of my daughters friends, you just couldnt see the layers as the coconut plam was too dark. So next I made it with agave nectar. You can see the layers beautifully in this version, and it tasted like delicious, zingy, lemony, chocolate heaven! Though the texture is a little denser than when made with the coconut palm sugar, it was still kept light by using the latest vegan baking craze, whisked chickpea liquid in place of the egg whites! Whisked chickpea liquid is a vegan baking revelation and it works really rather well. I promise it is worth the effort! 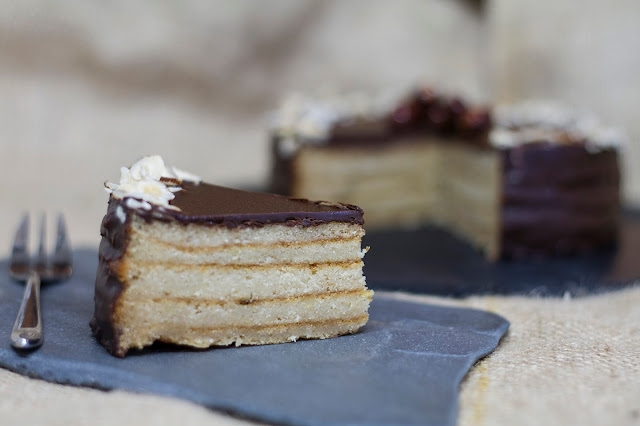 Method
Grease and flour a 16cm lose bottom cake tin and preheat the grill to high.

Drain the liquid from the chickpeas into a bowl and whisk with an electric mixer until light and fluffy and forming peaks. This can take around 10-15 minutes and should look like this: 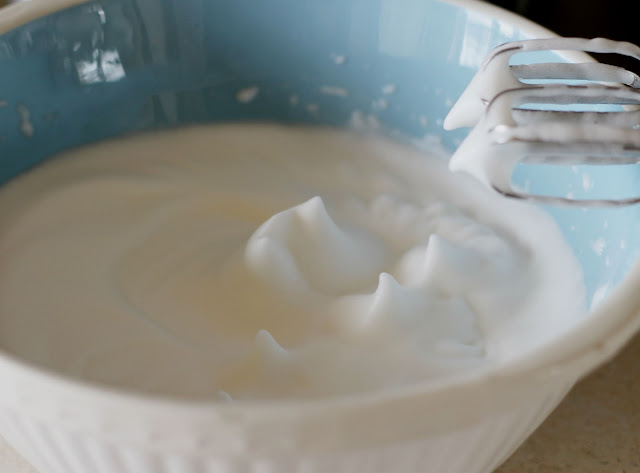 Set the whisked chickpea liquid aside while you make the batter.

In a large bowl, beat together the agave and coconut spread until light and creamy. I like to use an electric whisk for this, until the day I convince my hubby to invest in a Kitchen Aid that is!

Add the soy milk with the tapioca flour, the lemon zest and the vanilla extract and the sea salt. It looks like the mixture is seperating at this stage but it will come together when you add the the flour.

Sieve the flour into the mixture and combine well.

Next, with a large metal spoon, gradually add in the whisked chickpea liquid. You want to fold this in carefully so as to not knock out the air.

When the whisked chickpea liquid is well mixed in, add a large serving spoonful to the cake tin, tilting the tin to spread the mixture into an even layer. Put this under the hot grill and cook for around two minutes, until quite dark golden on top. You need the top to be very brown so that the layers show up in the cake. The top of the cake tin should not be too near to the top of the grill, I had a good 10cm of space between the top of the tin and the grill.

Continue adding a large spoonful of batter at a time, and grilling until all the batter is used up, it should make around 8 layers.

When cooked, leave to cool for a few minutes before removing from the cake tin and transferring to a wire rack to cool further. While cooling, heat the apricot jam in a saucepan until just warm, and brush all over the cake. This helps the chocolate to stick to the cake. 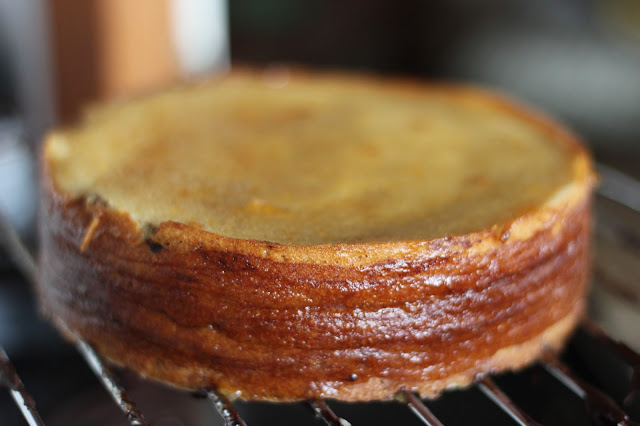 Next make the chocolate topping! In a glass bowl, set over a pan of simmering water, melt the chocolate together with the spread. Pour over the cake, smoothing it down over the sides until the whole cake is covered in delicious chocolate!

Let set slightly, and garnish with the flaked hazlenuts or almonds around the edge.

If you would like to make caramel hazlenuts for the centre garnish. Heat the coconut palm sugar in a pan with the water until bubbling, be careful as this stuff can burn. Let it cook for around 5 minutes before removing from the heat and cooling by setting the pan in a bowl of cold water. The caramel will start to thicken as it cools. Add the hazlenuts and stir to coat, transfer to greaseproof paper to cool, then pile them up in the centre of the cake.

Voila! You will have an amazing centre piece for any party of get together, that will surely impress, as well as being pretty virtuous in the cake department. Who said you can't have your cake and eat it! We noticed that this cake tastes best on the day it is made, as it has a tendency to dry out if left overnight, but luckily left over cake isn't such a problem in our house! 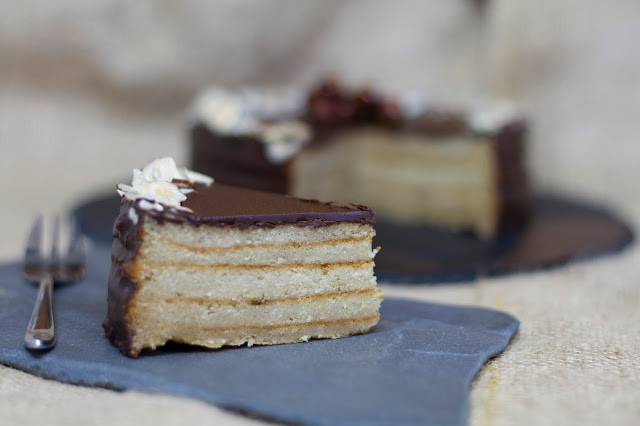 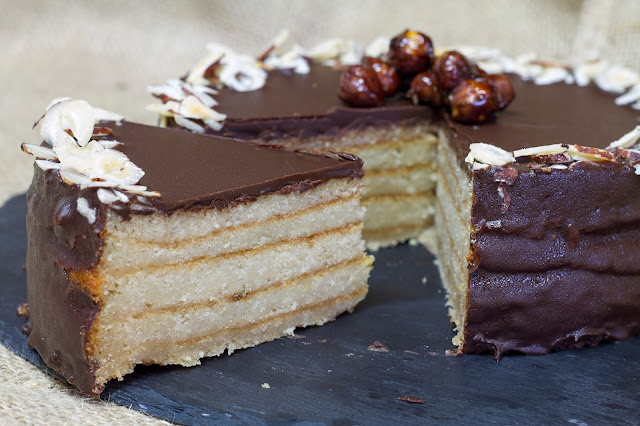 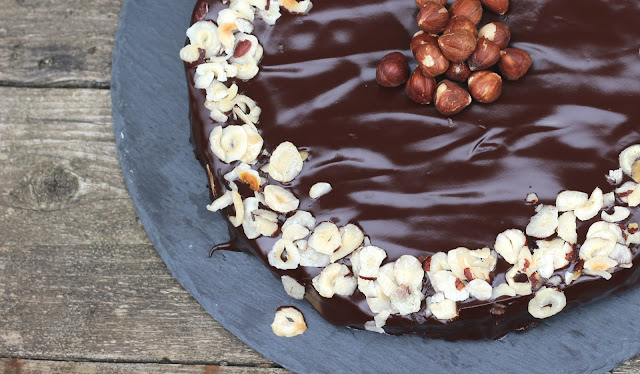 I would also like to thank a lovely guy named Matt, who lives near me, who came over to give me a crash course on inside photography and help take some of these pics for me! I have a lovely new camera now, and have started to learn the ropes. Boy oh boy is there alot to learn.

If you want more tasty vegan and refined sugar free recipes, check out my book How to Eat a Rainbow! Available in the US from Vegan Publishers and in the UK from the Vegan Society and signed copies from Coles Bookstore.

How to Eat a Rainbow has been nominated for 'Best Vegan Cook Book' Woo-Hoo! So excited! I would love it if you could vote for it at VegfestUK, it would man the world to me and help spread the message that healthy vegan food is delicious! Thank you.
Posted by Ellie@ Ellie's Recipes at 11:31 7 comments